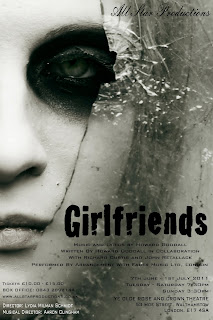 The Rose and Crown on Hoe street ranks pretty highly among my favourite places in Walthamstow, now flourishing as a well established theatre pub. Their comedy nights have recently started to attract some bigger names, such as Richard Herring who will be appearing in July for a preview of his new Edinburgh Fringe show. The theatre-group-in-residence, All Star Productions, can also be relied upon to put on a great performance and I try and make it along to as many of their shows as possible.

On Friday, we went along to see the new musical offering, 'Girlfriends', originally a 1986 musical by Howard Goodall, following the lives of a group of female Airforce base workers during World War II. In this version we saw the story focus on two best friends involved in a love triangle with an RAF pilot 'Guy', in a mostly lighthearted show which also touched on the heartbreak of waving goodbye to someone each night, never knowing if they would return safely or not. of  The highlights for me were a masterful performance by Aaron Clingham on the piano and great all-round performances from the cast in creating a set of believable and engaging characters The lyrics, whilst cheesy, were deliberately so and laugh-out-loud funny at times.
You can read more about the theatre company All Star Productions and book tickets for their shows here: www.allstarproductions.co.uk  Girlfriends is on until 1st July 2011.
Posted by Unknown at Sunday, June 12, 2011