Last night marked an important milestone in the long-running quest to bring back Walthamstows beloved and neglected EMD cinema, as Waltham forest council met to decide whether or not to reject the UKCG's planning application to turn this historic venue into a church. 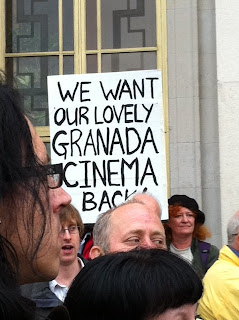 Shortly before 7pm the crowds started to gather on the steps of Walthamstow town hall, on one side local residents with placards and banners, and on the other side an equally large group of church supporters who were arriving in bus loads from other parts of east and north London. When the doors to the Assembly hall opened at around 7.15, the majority of the church supporters were able to rush inside, followed by as many cinema supporters as we could fit, leaving several hundred more cinema supporters including myself stuck outside!


And so began the agonising wait while the council meeting was called into session. Through twitter, facebook and texts we were kept informed of every detail of the proceedings inside. We glimpsed a photo of the Assembly hall interior, one side entirely full of UCKG supporters wearing matching neon yellow jackets. We were recounted tales from the pro-church speakers, describing how their lives had been turned around by the UKCG, we heard the rapturous applause and cheering from within when pastor Paul declared 'This cinema is OURS!'
Some enterprising individuals discovered an open window at the side of the hall, and 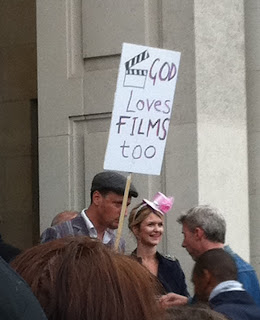 we rushed round en masse, redoubling our efforts, chanting out our rallying cry 'Save our cinema!' as friends inside tweeted and texted encouragement: 'keep going! we can hear you singing!' I think it was around this point that we discovered that the social club bar was open, which only helped fuel our enthusiasm further. We heard statements from several councillors, who said that they had not heard a single word of support for the church from the many thousands of local residents that they represent.
At 9.15 we heard that proceedings were beginning to draw to a close, and we rushed back round to the assembly hall entrance, excitement spreading through the crowd as we waited for the crucial decision from the seven councillors. 'We've got the first 4 votes!' someone shouted, 'We just need one more to win!', as everyone stood frantically refreshing their phone screens for the latest update. And then: 'We've done it!'. A huge cheer erupted from the crowd as we heard how the councillors had unanimously voted to reject the UCKG's planning permission. Our supporters from the inside streamed back out to join the celebration as our chants (somewhat optimistically, I admit) turned into 'We saved our cinema!'.
So, what next? There is still a long way to go before we see a cinema open in Walthamstow, but last night really felt like a turning point. It was truly heartwarming to see so much community spirit on show last night with people of all ages coming out to support our cause. Here are a couple of clips to give you a flavour of the fantastic atmosphere.
The moment we heard the result:

More celebrations as people emerge from the hall! Now the crowd starts chanting 'We saved our cinema!'

To read the full story of the Walthamstow EMD cinema and find out more about how you can support the cause go to: http://www.mcguffin.org.uk/

Email ThisBlogThis!Share to TwitterShare to FacebookShare to Pinterest
Labels: cinema, protest, save our cinema, walthamstow