I often hear Walthamstow described as an up-and-coming area, and having lived here for five years now, am starting to see some evidence to support that assertion. The village is already arguably the centrepoint of the Walthamstow revolution, with its series of wonderfully middle-class shops and restaurants ( I mean, even the Spar has an in house Sicilian pizza chef!), but the effect is slowly beginning to spread outwards towards the more run down areas. Hoe street has always been a particularly low point of the area for me, with its endless sequence of fried chicken shops, off licences and a suspicious looking 24hr sauna with frosted windows.
It was with some excitement then, that on my usual walk to the station one day I noticed the old Copycats printing shop on the corner of Jewel Road had been taken over. A sign appeared above the front door in ornate lettering bearing the words: 'Le Delice'. 'A new Deli!' I thought to myself 'Or a patisserie! And just around the co 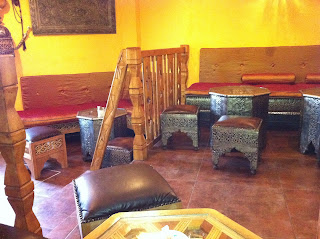 rner from my house!' From then, each time I walked to the station I would look with anticipation at the whitewashed windows hoping for some sign that the refurbishment was progressing and that the place might be ready to open. And I waited. After one year had passed I assumed the plans had fallen through, and I abandoned my thoughts of lazy Sunday mornings reading the newspapers whilst enjoying a croissant after a leisurely walk through the park. It was not until earlier this year, just when I had given up all hope on the place, that I started to suddenly see some signs of life. The paper screens had been taken down to reveal a lovely little cafe with deli counter, and then finally in April, Le Delice opened.
Walking through the doors the first time on opening day, I was surprised to see how spacious the place is. Floor to ceiling windows all along one side give a wonderful light feeling to the place, which extends all the way down into a snug and cosy Moroccan inspired room at the back. For food you can choose from a range of tasty sandwich fillings, served on normal bread/paninis o 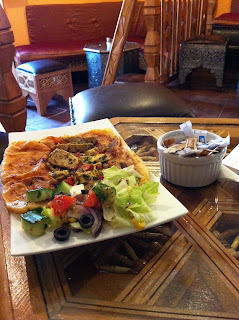 r the delightful homemade savoury pancakes (see photo) which I would highly recommend. The freshly made crepes are also excellent, but I have yet to work my way any further down the food menu! You can also enjoy a selection of enticing looking cakes from the front counter, and an ice cream bar. The staff have all been very friendly each time I have been in, especially the owner, who seemed delighted with the reception he was getting from the local community. All in all, Le Delice is another very welcome additon to Walthamstow and a great step in the right direction for the neighbourhood. 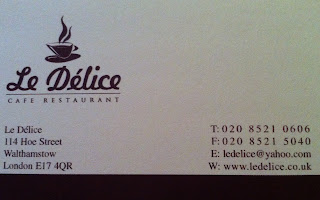