Benchmarks at The Rose and Crown 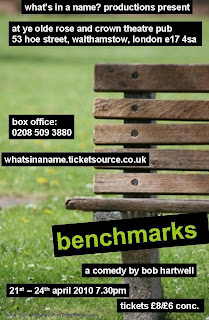 The Rose and Crown on Hoe street is probably my favourite pub in Walthamstow. First of all its only a short walk from my house through the park. Secondly the new owners have put a lot of effort in to refurbish and rebrand the place as a theatre-pub. Tucked away up a tight staircase is a room above the main bar, which they can use for live music, plays or art exhibitions. We went last year to see the excellent musical 'Nine' by All Star Productions. They also have a monthly open mic stand up comedy night called 'Glee 17' which is surprisingly good although some of the performers look absolutely terrified and I can't help but feel sorry for them.
So last night there was a new play showing, 'Benchmarks' by Whats In a Name Productions. We went along with our new neighbours to check it out. The room was packed so we could only get standing tickets at the back which was a slight pain, but I was delighted to see the pub doing so well and hope that it will convince them to keep putting on shows like this and supporting local small theatre companies. The play itself centred around a park bench paced in centre stage, and told the story of six people whose lives unfolded in front of us as they met around this bench during the course of a day. We had the park keeper worried about keeping his job, a jogger trying to set up her own bistro, a middle aged lady whose marriage was falling apart, a teenage mum, a bag lady and the property developer wondering if he should buy the park to build on. I think the cast did a great job of keeping everyone engaged and I hope they will be back with another show soon!
Posted by Unknown at Saturday, April 24, 2010

Email ThisBlogThis!Share to TwitterShare to FacebookShare to Pinterest
Labels: benchmarks, rose and crown